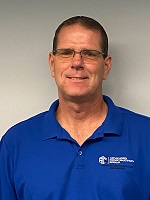 Jon has been married to his wife, Tanya, for 22 years.  She works in HR at Honeybaked Ham.  They have two children, Faith (19), who is a student at UT, and Patti Ann (12) who is in Junior High.  They also have two pets.  One is a Lab/Shepard mix named Remi and the other is a cat named Winston.

The people that have made the biggest difference in his life is his wife and kids.